It’s the poorest county in the state of Utah and among the 40 poorest counties in the United States. Over half the population is Native American – largely Navajo and Ute – and it’s one of the most beautiful places on Earth: San Juan County.

I met him at a shelter in Blanding, where he was unloading boxes of clothing donations from do-gooders. (God bless those do-gooders.) I lent a hand, and he nodded in appreciation. It felt good to be helping out. The homeless folks inside would be blessed with those clothes. It was a job worth doing.

What do you do? Where do you live? Got any family?

We evaluate the worth of one another by the answers to those questions. I can’t speak for women, but men are heavy on the “What do you do” part. Our value in the community rests on the response.

If you happen to be a lawyer or doctor, I’m happy to make your acquaintance. If you’re a “nobody,” though, maybe a day laborer or (worse yet) you’re “in between jobs,” I figure there must be something wrong with you. After all, nobody ever grows up wanting to be a “failure,” right?

In my own experience, if I’m doing okay – if I’m working a job I’m proud of – I love it when you ask the question. I’m happy to tell you “what I do.” If I’m not, though, if I’m down on my luck and busing dishes at the diner because I just got laid off from my “real job,” I’m not too anxious to share the story.

After all, a man is what he does. At least that’s the way we tend to play the hand we’re dealt.

There’s more to the picture than meets the eye 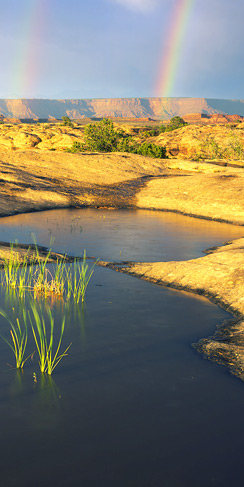 This particular summer, I was doing okay. I signed on for a VISTA assignment to San Juan County, and was working at the regional Small Business Development Center (SBDC). We were trying to help get a business incubator off the ground and show people the fundamental business keys to success.

Given my position, I figured there might be a way I could help my new-found friend. You might guess how that worked, though: as things turned out, he was the one who helped me.

He was Navajo. Maybe in his early 40’s. Straw cowboy hat and a big grin. I liked him immediately, so as soon as we had finished unloading, I introduced myself and asked the question:

“Ahhh … fix a few cars now and then. Help out where I can. Live down Monument Valley way.”

“Do you work out of a shop?” I queried, trying to get a fix on his situation.

“Nahhh, no shop. Just got an old tree I work under. Got it rigged with a chain, in case I need to pull an engine. Always wanted a shop, though. Always did.”

“Well, why don’t you do it?” I blurted out, imagining a booming new business that could put a whole crew of people to work. “I can help!”

He eyed me carefully for a bit, and I watched the wishful thinking in his eyes fade back to solemn reality: “Nope,” he shook his head. “It couldn’t ever happen for me. I gave up on that idea years ago. No use thinking about it.”

Of course I launched into my sales pitch about how the government, the incubator, and me could provide everything he needed to draw up a winning business plan and get a start-up funded. I explained how my job was to help bridge the gap between people with business ideas and the Small Business Development Center … but his mind was made up. My attempts at persuasion pushed him deeper into the shell, though my heart ached to help him see the potential.

He had to get back home. “Supper’s waiting.”

Listen, not everyone needs to start a business or manage employees or “be successful.” I’m not saying that at all. Some folks are happy keeping it simple. They don’t need much, and they don’t give a hoot for your or my admiration. For them, the keys to success may consist of a garden spot and a fishing hole. I want to be like that.

Failure is an inside job.

And that’s what hurt most when I saw the would-be auto shop owner drive away. I had seen the hope in his eyes. I had witnessed the way he perked up when he spoke of his vision: a nice new building with several lifts, all the right tools, and a parts store attached, so people wouldn’t have to drive clear to Cortez or Page to get a decent price on what they needed.

He possessed the required skills. He was uniquely qualified with the necessary connections and vision. The SBA (Small Business Administration) business incubator I was promoting was equipped with every bit of the new business start-up counseling, training, and access to financial help he would have needed for a launch. And the area was in severe need of just the facility he described.

We were sitting in the middle of a perfect recipe for success … yet, he climbed in his truck, tipped his hat, and hit the road.

How could that happen?

That chance meeting led me to think hard about the situation. The SBA had invested a ton of cash to build the incubator facility, yet it was all but empty. My assignment was to get the word out – to advertise it, promote it, and write something that would bring entrepreneurs to the facility.

Lack of promotion wasn’t the problem I faced, though. Not by a long shot.

We were in a rural area. Not much went unnoticed. Just about everyone I spoke with knew about the business incubator and the SBDC (Small Business Development Center) office there. The Navajo automobile mechanic had heard of the center. He could have walked in and spoken with a seasoned business professional any day of the week.

One could surmise the problem was that people “just don’t trust the government.” And I certainly found a healthy dose of suspicion in the air. If any community on Earth has a justified reason not to trust the U.S. government, it’s Native Americans.

There was more to it than a lack of faith in the government, though. That isn’t anything new – distrust of Uncle Sam is what prompted the Constitution and Bill of Rights. There was something deeper; something even more paralyzing; something that wielded the power to kill any idea or desire in its path … and my pondering let me to this conclusion:

If I don’t believe I can accomplish something, then it will be all but impossible for me to succeed. I may talk about the idea. I may research the idea. I may even make some tentative moves in that direction – but I won’t possess the most necessary component in any endeavor: Faith.

T.S. Eliot wrote, “Only those who will risk going too far can possibly find out how far one can go.” Life is a constant risk; that’s just how it is.

If you go into a PPC campaign, thinking it’s probably going to fail … it probably will. If you hire a PPC management firm, thinking there is little chance of a positive return on investment … there probably is. The best batters in baseball strike out way more than they hit a home run. You will look for the strikeouts and pull the plug. Much of life is a self-fulfilling prophecy.

I’m not saying we should take a Pollyanna approach to business – that we should launch out on every endeavor with a devil-may-care attitude or adopt a “name it and claim it” mentality.

Careful planning and proper implementation are crucial to business.

When you get right down to it, though, there are just a few fundamentals crucial in life — and if there is one primary Key to Success, it is this:

If you advance confidently in the direction of your dreams and endeavor to live the life you have imagined, you will meet with a success unexpected in common hours (Henry David Thoreau).

Don’t despair, my friends. Dream into it.

Other posts to help you grow:

What Acting and PPC Have in Common

Find out how to set and reach your PPC goals. Call 888-659-2680 for a free consultation with the Conversion Max team.